WANTED: A Council Officer with a Convincing Explanation!!!

Having lived in the borough of Walsall for the past few years, I thought I had seen and heard of most of the daft things our local council gets up to. Readers of my Black Country Londoner  blog would have previously seen my postings on some of the more “original” ideas proposed by the council for the elderly, including the scrapping of the meals on wheels service in favour of lunchclubs and take-away services. Read full story at  http://wp.me/pSC99-3t

However, what I am about to describe even manages to trump this piece of lunacy. The estate I live on was built about a dozen years ago, a fact which seems to have escaped double glazing and cavity wall insulation companies. They are forever telephoning or knocking on my door offering their latest deals at unbeatable prices, only politeness stops me from setting next door’s stroppy cat on them!

Last year the powers that be at the highways department, decided the roads and footpaths on the estate needed to be re-surfaced. Not that there was anything wrong with the old surfaces, on the contrary, they had held up remarkably well. Anyone travelling along Pelsall Road from Brownhills or passing through Maybrook Road Industrial Estate, would have seen far more urgent cases that warranted their attention.

Despite this, and with hardly any consultation, last autumn we were informed that re-surfacing works would be taking place on the estate. Private contractors were duly employed to carry out the works which involved firstly sweeping both the roads and footpaths, laying down a layer of hot bitumen, then covering it with crushed stone before applying a heavy roller to ensure it set properly. So far so good you might think. However it didn’t take long before some of us noticed little trails of stones following us into our hallways and lounges, on top of which, when the contractors came to clear away the excess material used to re-surface the footpaths, they managed to blow quantities of the stuff onto people’s lawns with the hand-operated blowers they used to collect it into piles.
If that was not bad enough, the snow and ice last winter left puddles of surface water as it melted because the excess  could not run freely into the drains, something frequently repeated when we get heavy rain. But even that is nothing compared to the deterioration in the surface noticed in recent weeks since we began getting the latest, albeit infrequent, spells of hot weather. It would appear the bitumen is melting in places and is seeping through the parts of the re-surfaced roadways and paths damaged by the winter weather. The following little montage illustrates what has been happening.

Following several complaints by residents, including from one of my neighbours, it finally registered on the council’s radar, and last week they even managed to get an engineer to come and inspect the roads and pathways affected.  His explanation after walking up and down for a few minutes went from “nothing to worry about”, to “an experimental process being tried for the first time” to the ultimate bureaucrat’s response, ” it needed doing.”
Whatever the reasoning, most people on this estate are of the opinion that with the council’s budget under threat and with the need to save some £65m over the next three years, even the highways department could have found better uses for its money than the botched re-surfacing job we have been left with.
However, as another previous blog of mine made clear some time back; finding a council highways officer with a modicum of common sense these days, is almost as difficult as procuring rocking horse manure for the garden roses. The image below illustrates my point all too clearly. 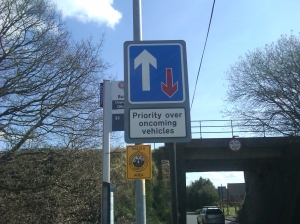 Too bad if you're waiting for the Bus!

This entry was posted on July 29, 2011, 10:58 am and is filed under Politics of Satire. You can follow any responses to this entry through RSS 2.0. You can leave a response, or trackback from your own site.